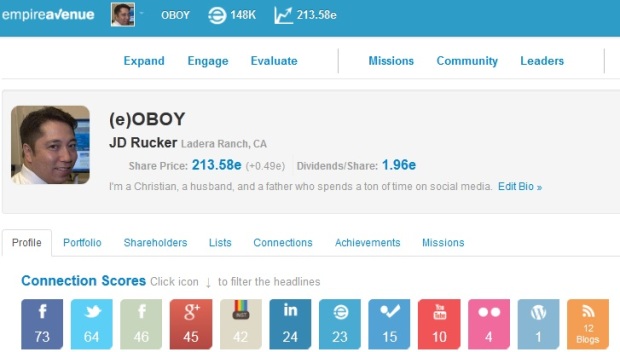 There’s Klout, Kred, and a dozen other tools out there that help people gain an understanding of where they stand in the social media world. They all use relatively complex algorithms to break down how influential an individual or entity is on Facebook, Twitter, and many of the other social networks. They assign scores, give kudos, have badges, and often offer rewards with those who are “good” at social media.

Despite their focus on rating, Empire Avenue shines above them all as the most accurate indicator with a robust breakdown of how much “power” and “popularity” someone has.

Note: Before I litter this post with so many “quotation marks” it would be easier to state for the record that I do not believe that these ratings are indicators of true power, popularity, or overall quality. They are good measures of how active someone is on social media and how well they operate on the various networks, but any online rating can be manipulated, thus the quotation marks. Assume that I take these ratings with a grain of salt and I won’t have to put anything else in quotes.

Empire Avenue is a Game

First and foremost, EA is intended to be fun. It takes the social media presence of individuals and entities and treats them as if they were public companies with stocks that can be traded on the open market. Using a well-designed economic infrastructure that revolves around eaves (the currency within the game denoted by an e following the value), players can buy or sell other players with share values ranging from under 10e up to over 500e for the top players. The value of the shares goes up or down based upon the amount of shares being purchased and the social media successes of the profiles attached to the stock.

With these eaves, players buy other players. That’s the core of the game – buying and selling each other. It takes a strong activity level and monitoring of players and their social media presence to know who to buy and who to sell, but it’s all very straight forward; new players can learn the ins and outs very quickly.

Empire Avenue on Quantity versus Quality

Now that we understand a little about the game, let’s look at the meat of the service. The ratings that are used to judge a player’s social media presence is by far the best out there. They have mastered the science of quality versus quantity better than other services. It’s not a simple numbers game – someone who Tweets every 10 minutes will not necessarily get a higher Twitter rating on EA than someone who posts a couple of Tweets per day but gets interaction and retweets from their posts.

This is the key to their ratings system that has made it so strong. They’ve seen what players have tried to do over the last couple of years to manipulate the system and they’ve put in countermeasures to combat them. Here is what they posted in their FAQ about Foursquare as an example of how they look at quantity and quality:

Check in to locations. Busy, verified locations (like those with specials) are worth much more than frivolous ones like “my basement”. Write tips, and get others to complete them!

This is where the credibility comes into play. EA has created a system that understands what real social media looks like differentiates it from attempts to game the systems. Someone can post 200 photos a day to Flickr, but if nobody is seeing the images it won’t help their score as much as someone who posts 3 photos a day that get views, comments, and favorites.

That isn’t to say that EA does not reward quantity. Players have to be active on their networks to achieve strong ratings. Going dormant on a network will result in a gradual decrease in their score. Still, quality is more important.

Empire Avenue has the Networks

With the exception of Pinterest, all of the major social networks are in play. This gives them a huge advantage over other rating services that focus almost entirely on Facebook, Twitter, and perhaps a couple of other networks. Bloggers are rewarded as well, though not as much because of the vulnerability of not understanding the quality of a blog. Still, having scores for Instagram, Flickr, YouTube, and Foursquare amongst others is unique to EA. The comprehensive nature of their index is much greater than their competitors.

This is extremely important for understanding the true reach of an individual or entity on social media. Someone may have an amazing YouTube channel, for example, that gets most of their attention and reaches thousands of people a day, but they would still have a low Klout score if they’re not active on Facebook or Twitter.

Rather than go into describing how the reporting works, I’ve taken a screenshot of my Facebook Network Score page, slightly manipulated to fit nicely on the screen. This type or reporting is available on most of the networks that EA tracks with a focus on what’s most important in that network. 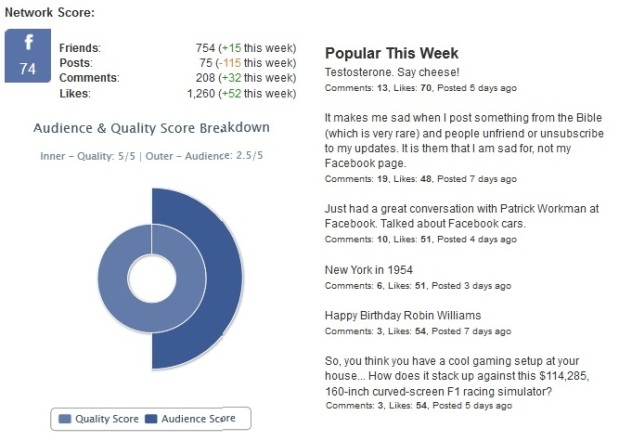 Klout, Kred, and the other networks have some great things about their reporting. Kred, for example, breaks down individual actions to the point that you can see when someone retweets you and how many points it was worth that stays in line with their adoption of transparency in their model while Klout graphs users into styles that look beyond how much people are doing on social media and tries to interpret the topics they are most important in, but EA’s comprehensive format is suitable for tracking overall social media success.

All in all, Empire Avenue is still a game. The nature of the ratings they use is helpful to those who want or need to get a clear understanding of their strengths and weaknesses, but it’s too in-depth for most people. A social media manager can use it for their company or a Facebook guru can use it to keep track of their success, but otherwise most people just see their score and try to do what it takes to make that number go up. That’s part of the game. That’s part of the fun.

Social media is supposed to be fun. EA helps make it so.

This entry was posted on July 29, 2012, 12:54 pm and is filed under Social Media. You can follow any responses to this entry through RSS 2.0. You can leave a response, or trackback from your own site.